When Timothy Riordan retired from being the City Manager of Dayton, Ohio, he wanted to honor the many civil servants he knew who demonstrated these ideals in their work, day in and day out. He also hoped to bring recognition to Dayton’s history as a pillar in the good government... Read more

When Timothy Riordan retired from being the City Manager of Dayton, Ohio, he wanted to honor the many civil servants he knew who demonstrated these ideals in their work, day in and day out. He also hoped to bring recognition to Dayton’s history as a pillar in the good government movement of the early 20th century, when the city explicitly stated in its charter that public employees be hired on the basis of merit and fitness and promoted on the basis of efficiency and conduct.

Tim had an idea: through an open request for proposals, he would find an artist to create a monument emphasizing and clarifying these public service values. He planned to personally fund the project, and eventually he was joined by three other contributors. The monument would be erected on public property and owned by the city.

Employing a group of like-minded friends and the local art consulting firm Build Art In, Tim created a committee to review dozens of proposals. Internationally recognized sculptor Jon Barlow Hudson, a resident of nearby Yellow Springs, Ohio, offered a compelling vision for the monument, titled “The Common Good.”

Jon proposed a monolith, eight feet high by 6.6 feet wide by 16 inches deep, of Pennsylvania granite. On either side, a seat would be hewn, and an opening between these seats would enable two people to communicate through the stone.

“The idea here being that communication between people is bridging the different perspectives that each person has: each seat faces a different direction on opposite sides of a very intractable material,” Jon wrote in his proposal, “But, the seats are open to each other, so they are nevertheless able to communicate. This is a reference to the communication required to build bridges through public service.”

The artist and committee together identified pertinent quotations about public service to engrave in a running frieze around the top of the monument and inside one of the seats, engaging the viewer in circling and sitting in the sculpture. Then Jon got to work. His starting point was an 8-by-6-foot granite surface plate fabricated by Lawley Precision Surface Plate in Wyoming, Pennsylvania. He had obtained this massive piece from Wright Patterson Air Force Base.

“With the surface plate standing vertical, one sees both its polished face, and its opposite side, which is the natural, raw texture left by the a metal-wire block-cutting process. I wanted to bring attention to both surfaces. On the already highly polished face, I wanted to continue that surface treatment in the seat. I planned to add contrast by also polishing the interior of the elliptical seat cut into the textured side,” Jon explained.

First using a core drill and 5 inch diamond core bit to set the depth of the seat as the block was prone, he then brought in a crane to lift it to its standing position and used a Stihl chop saw with a 14-inch diamond blade, followed by a 9-inch diamond disc on a two-hand grinder, for the rest of the rough cutting. After breaking out the stone to create the seats, he did the fine shaping with a 4-1/2-inch diamond disc and a Braxton-Bragg Viper Contour Blade on a Bosch grinder. Final polishing of the seats was done with a Zec 36 grit disc followed by series of seven diamond polishing pads on a water-feed air polisher.

This new addition of public art, both imposing and intimate, was installed in November 2017, in Cooper Park, a central downtown square. It serves as a gateway into the park from the northwest, leading to a spectacular new public library building on the south side of the square. Daniel Cooper, an original settler and Dayton’s second mayor, established Cooper Park “to be an open walk forever.” It is thus fitting that a monument dedicated to public servants and the common good should reside in the City’s first community greens. 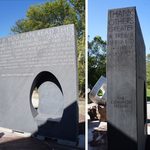 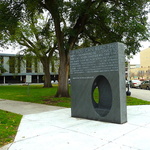 Something missing? Send us a note.

Please note: The Greater Columbus Arts Council (Arts Council) does not own or manage any public art. For the purposes of this database many pieces were entered by the Arts Council while we continue to search for the appropriate owner/manager of the work and other information to complete the entry. The Arts Council has tried to gather all available information about the works in this database, however, we acknowledge there may be missing or inaccurate information. If you can help us correct any inaccuracies, or provide more complete information, we would be grateful. Please use “Something missing? Please send us a note” above.

Taking images of public art works and sharing your experiences is one of the most fun reasons to engage with public art. As a community, we care deeply about the artists who have contributed the artworks we enjoy every day. Please be sure to credit artists when you share your photos. If you have an interest in using public artwork present in this database for commercial purposes, please contact Jami Goldstein at the Greater Columbus Arts Council. Taking your own images of public artwork does not release you from the responsibility of artist credit and/or compensation.

This site is produced and managed by the Greater Columbus Arts Council and supported by the Ohio Arts Council and public art collections across the state. Contributors to the databases to date include collections held by the Arts Commission of Greater Toledo, City of Columbus, Columbus Metropolitan Library, Dublin Arts Council, City of Upper Arlington Cultural Arts Department, City of Kettering, Downtown Mansfield Inc., Franklin County Convention Facilities Authority, John Glenn Columbus International Airport, Licking County Foundation, Ohio Arts Council’s Percent for Art program, Short North Arts District and the City of Sandusky. The database was funded in part by a grant from the Ohio Arts Council. Research and development support is provided by Designing Local, OSA Technology Partners and Columbus artist Stephanie Rond. The Columbus Makes Art campaign is a citywide, collaborative marketing effort designed to highlight the incredible talent of central Ohio artists. The Greater Columbus Arts Council is supported by the City of Columbus and the Ohio Arts Council.

To support and advance the arts and cultural fabric of Columbus. www.gcac.org

About Arts in Ohio

ArtsinOhio.com is your one-stop resource for arts, festivals and cultural events throughout the Buckeye State. And, even better, it’s free!