Executed by one of the most iconic, American figurative sculptors of the 20th century, this monument to Hart Crane is a reminder that Cleveland fostered one of the most impactful American poets of the twentieth century. Crane was born in 1899 in Garretsville, Ohio (SE of Cleveland) and lived there... Read more

Executed by one of the most iconic, American figurative sculptors of the 20th century, this monument to Hart Crane is a reminder that Cleveland fostered one of the most impactful American poets of the twentieth century. Crane was born in 1899 in Garretsville, Ohio (SE of Cleveland) and lived there for 7 years before he and his family moved up to the city where his father (creator of Life Saver Breath Mints!) established the Crane Chocolate Company. Hart loved to dance whenever he could. He loved playing Chopin’s yearning nocturnes and Dvorak’s “mad and scarlet” melodies on piano. He loved “tearing up Euclid” in his mother’s 1914 Baker Electric Automobile (which topped out at a blistering 14 mph.) Crane loved life, and everyone in life loved Crane: his charm, his mind for the arts, and his punishing wit.

But life came at Hart fast, and in 1917, after several tumultuous years, his parents separated. The divorce spelled disaster for the young man who loved both of his parents dearly. And to make things worse, his sensitive personality depended almost entirely on validation and support from his friends and family. He wrote to his father at the age of 18, after the start of the divorce proceedings:

“Please, my dear father, do not make the present too hard—too painful for one whose fatal weakness is to love two unfortunate people, by writing barbed words. I don’t know how long we three shall dwell in Purgatory. We may rise above or sink below. But either way it may be, the third shall and must follow the others, and I leave myself in your hands.”

His mastery over language is evident, even in this informal letter, and that is where he found his lone solace. His gift for writing was not lost on him, and even during his darkest days he wrote about how the late evenings when he was writing were always rejuvenating and exciting. Crane’s poetry is itself beautiful, but it certainly doesn’t come from a beauty he observed. His work is rooted in sadness, anxiety, and fear. Rejected by his parents, too emotionally crippled to depend on relationships with his friends, and outcast as a social pariah for being a bisexual, Crane’s poetry is characterized by fragile beauty and a poignant representation of the human condition. He believed that the only reliable things he had in his life were his imagination and his noble status as a poet. Crane believed, along with Plato and others, that poets could, at any moment, be given a rare, objective glimpse into reality: an opportunity afforded to few. Crane did not take those chances lightly, so he captured them in his profound writing. His notoriously dense and difficult poems are diverse in their subjects and stylings, but united in their common beauty and ability to be unabashedly emotional, without becoming sentimental.

His Magnum Opus, “The Bridge” was published in his lifetime. But unfortunately, after its release, Crane felt he had fulfilled his life’s only purpose. Paired with a stiflingly wicked addiction to alcohol, Crane was convinced that he had lost his gift as a poet, and that he was no longer worth anything. He watched all the people in the world around him saying “every day I am growing better and better in every way,” while without a diploma or a job, Crane pitied himself and lamented, “I am tied to the stake—a little more wastefully burnt every day.” Crane loved his parents but grew to resent both of them over the years. He was convinced that, having stopped going to his family for help, he was becoming nothing but a burden on his friends. He was drunk nearly every night, and every time his sobriety vanished, his humor vanished with it. He became irritable and somber. Crane was robbed nearly every night by sailors he tried to bed in his drunken frenzies.

With what he believed was all he could offer left between the covers of his notebooks, a sopping drunk Crane waved goodbye to his fiancée, climbed atop the flimsy rail of the ocean liner he was riding, and leapt overboard. It was not his first attempt at suicide, in fact one time only a few months earlier, he tried to cast himself off the roof of his New York apartment before his best friend Sam Loveman miraculously grabbed his ankle and stopped him at the last moment. But this time, without Sam, and with his fiancée fast asleep across the boat, Crane perished in the cold, unforgiving waves of the Atlantic.

An interview with Loveman revealed the character that Hart was: widely loved, but blind to it. Fun loving and funny. Clever and well-read. Sam said that Hart is often made out to be a “victim of the social system”, but Hart himself never uttered a word that would have lead you to believe he was suffering.

While Crane’s name may not be as widely recognizable to many as some of his peers, such as Emerson, Thoreau, Frost, Dickinson, or Whitman, Crane’s work changed not just poetry itself, but the way that poets and readers alike approached poems and the role of the poet in an expanding world.

I believe Crane’s poetry can be succinctly encapsulated in this 1929 piece, Paraphrases, which follows a man as he reflects on his own impending death. Paraphrases tries to capture the thoughts of thoughtlessness, and put the speechless into exact words but it cannot… so it paraphrases:

Of a steady winking beat between
Systole, diastole spokes-of-a-wheel
One rushing from the bed at night
May find the record wedged in his soul.

Above the feet the clever sheets
Lie guard upon the integers of life:
For what skims in between uncurls the toe,
Involves the hands in purposeless repose.

But from its bracket how can the tongue tell
When systematic morn shall sometime flood
The pillow—how desperate is the light
That shall not rouse, how faint the crow's cavil

As, when stunned in that antarctic blaze
Your head, unrocking to a pulse, already
Hallowed by air, posts a white paraphrase
Among bruised roses on the papered wall.

Crane’s memorial here, executed by iconic sculptor and fellow Clevelander, William McVey, captures Crane in a fleeting moment of change. One cannot tell whether Crane is coming or going, dressing or undressing, but they know that regardless it will only last a blink. And just like Crane’s own life, the short transitory instant that would have otherwise been lost to time, is fittingly commemorated with art, whether McVey’s or Crane’s own. His noble, upward gaze reflects his status as a poet and a visionary.

In that interview with Sam Loveman, the interviewer, John Unterecker, asks him:
“When I say “Hart Crane” what comes to mind?
“The best friend that I ever had. And the most alive human being that life had ever given me.” 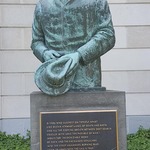 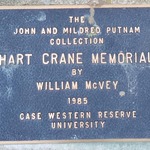 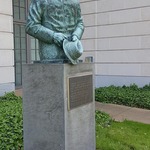 Info about this place

Something missing? Send us a note.

Please note: The Greater Columbus Arts Council (Arts Council) does not own or manage any public art. For the purposes of this database many pieces were entered by the Arts Council while we continue to search for the appropriate owner/manager of the work and other information to complete the entry. The Arts Council has tried to gather all available information about the works in this database, however, we acknowledge there may be missing or inaccurate information. If you can help us correct any inaccuracies, or provide more complete information, we would be grateful. Please use “Something missing? Please send us a note” above.

Taking images of public art works and sharing your experiences is one of the most fun reasons to engage with public art. As a community, we care deeply about the artists who have contributed the artworks we enjoy every day. Please be sure to credit artists when you share your photos. If you have an interest in using public artwork present in this database for commercial purposes, please contact Jami Goldstein at the Greater Columbus Arts Council. Taking your own images of public artwork does not release you from the responsibility of artist credit and/or compensation.

This site is produced and managed by the Greater Columbus Arts Council and supported by the Ohio Arts Council and public art collections across the state. Contributors to the databases to date include collections held by the Arts Commission of Greater Toledo, City of Columbus, Columbus Metropolitan Library, Dublin Arts Council, City of Upper Arlington Cultural Arts Department, City of Kettering, Downtown Mansfield Inc., Franklin County Convention Facilities Authority, John Glenn Columbus International Airport, Licking County Foundation, Ohio Arts Council’s Percent for Art program, Short North Arts District and the City of Sandusky. The database was funded in part by a grant from the Ohio Arts Council. Research and development support is provided by Designing Local, OSA Technology Partners and Columbus artist Stephanie Rond. The Columbus Makes Art campaign is a citywide, collaborative marketing effort designed to highlight the incredible talent of central Ohio artists. The Greater Columbus Arts Council is supported by the City of Columbus and the Ohio Arts Council.

To support and advance the arts and cultural fabric of Columbus. www.gcac.org

About Arts in Ohio

ArtsinOhio.com is your one-stop resource for arts, festivals and cultural events throughout the Buckeye State. And, even better, it’s free!